My long time good friend Jeff bought tickets for last night’s Trombone Shorty concert called the Voodoo Threauxdown and asked me to join him and his lovely wife.

Even though we all arrived early, we walked into the hall as a warm up band was in the midst of performing. We soon realized that this was not simply going to be a concert by Troy “Trombone Shorty” Andrews, but by other New Orleans bands as well. The New Breed Brass Band was playing as we arrived. They were a spirited band of horns and simple drums, the kind of band you expect to be marching down Bourbon Street rather than standing on an Arizona stage. Good players, all providing a full dose of entertainment. 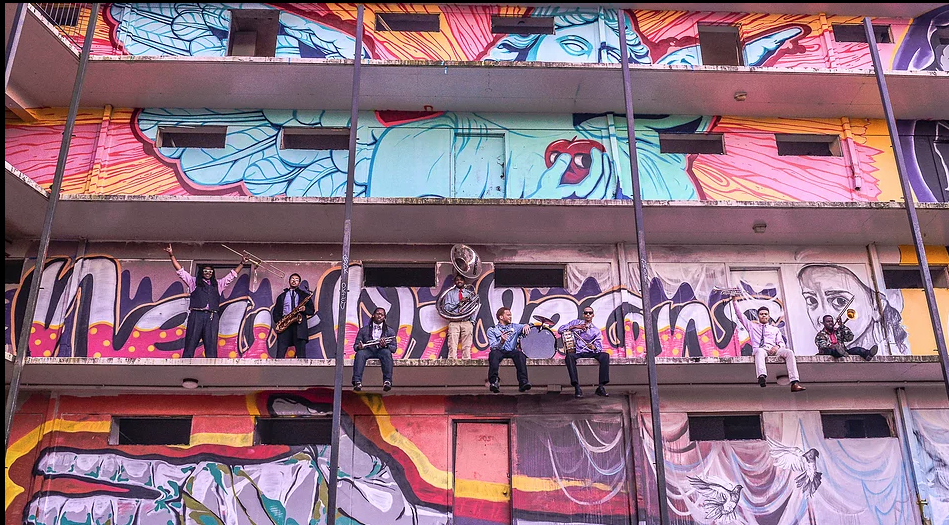 The next band was The Preservation Hall Jazz Band. The band rotates different personnel, but one of the original members, and my personal favorite was trombonist Ronell Johnson. Dressed in a bright red vest and hat, Ronell had a massive growling sound that matched his bombastic personality as he swooned and danced across the stage and at one point throughout the audience. 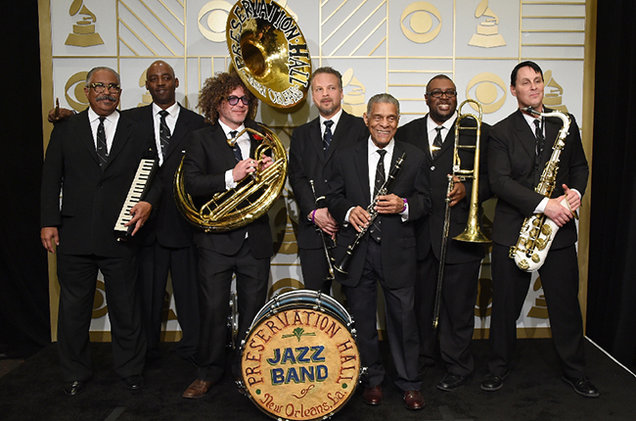 As the Preservation Hall Jazz Band stage was cleared and being set up for the next band, I thought, okay now we’ll hear Trombone Shortly. But we soon realized that yet another New Orleans band was about to entertain us. Sure enough, the band Galactic took the stage fronted by Grammy winning singer Macy Gray. Another New Orleans trombone staple, Corey Henry added his voice to Galactic that definitely took the energy up a level, as if that even seemed possible after Preservation Hall! New Orleans blues guitar legend Walter “Wolfman” Washington made a guest appearance for a couple tunes showing off his soulful guitar and voice. 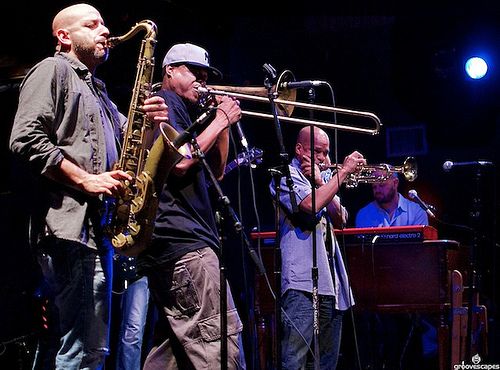 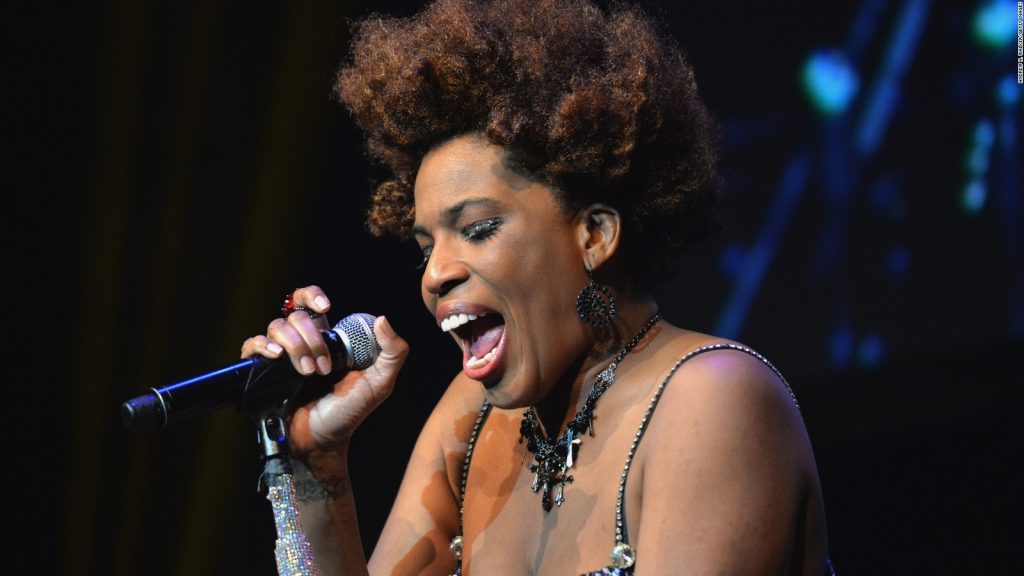 It was now almost three hours into the concert and the stage was again cleared to make way for what would be two backup singers, guitar, bass, keys, horns and not one but two drum sets. Fog began to fill the dramatically lit stage as the announcement for Trombone Shorty reverberated throughout the hall. The crowd went wild. 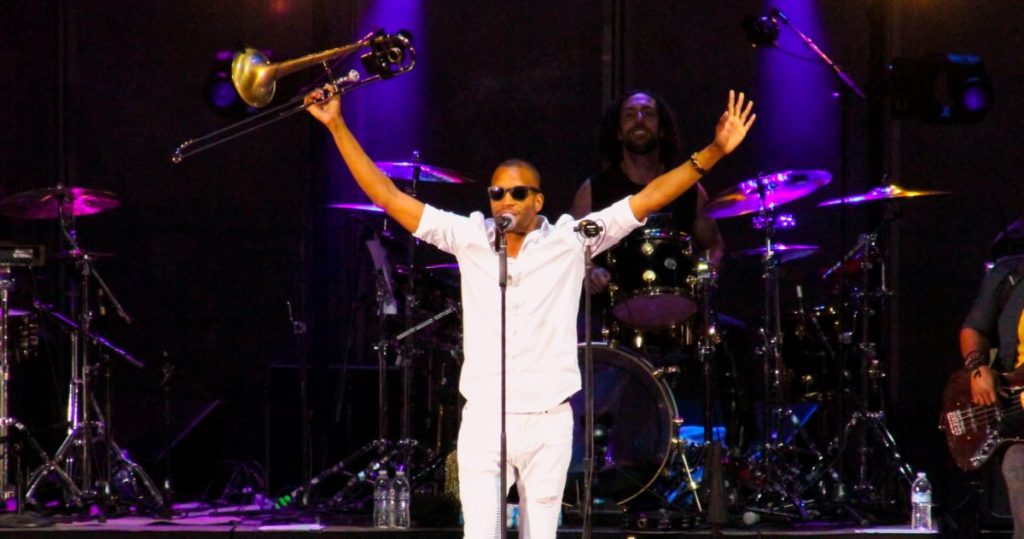 By now, sitting in your chair wasn’t cutting it, especially if you were anywhere near the stage like us. It was time to get up and move to the groove. Trombone Shorty has toured recently with the Rolling Stones, and as he pranced across the stage dancing with bandmates, he showed he’s paid attention to Mick Jagger. His time in Lenny Kravitz’s horn section didn’t hurt either! By now, the dancing was everywhere.

The concert as a whole was a clinic on New Orleans trombone playing. From the tasty brass backgrounds to the huge personality of a growling horn with slide wielded like a sword, Troy was adding yet another dimension.

He is a formidable brass player, also playing trumpet with the facility, improvisational skills, and high range rivaling many dedicated trumpet players. His trombone playing is rich with personality. His soulful licks and soaring emotion commands attention even in the midst of a thunderous band, and like each trombone player before him that night, piercingly loud. It’s one thing to play trombone fast and funky at a moderate volume. It’s quite another to do it at quadruple forte! Think running uphill while carrying a huge boulder. Sitting 10 rows directly in front of Troy, I could see what appeared to be a small opening in a small bell. Maybe it was my imagination, and I do not know what horn he plays, but it appears that he’s built for volume. 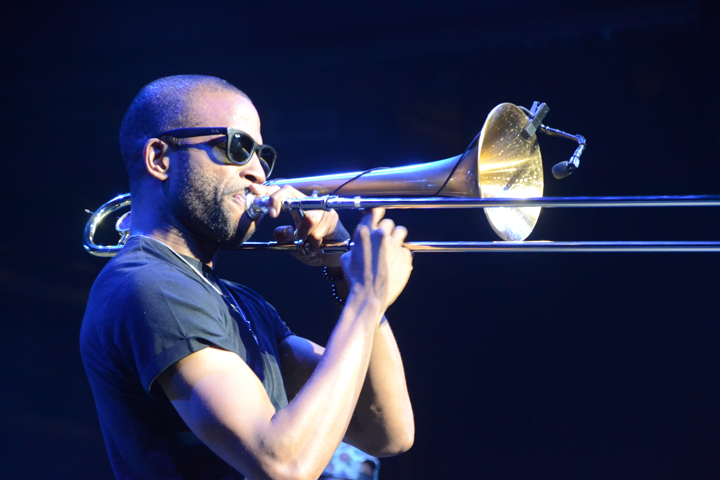 Regardless of the mechanics of his horn, this is one talented guy. To play in the groove as he did, running and dancing around the stage, circular breathing at one point for a good 90 seconds, and frequently whipping the crowd into a frenzy deserves all the credit I can give him.

Ah, to be young, good looking, charismatic, strong as an ox, and a superb musician… And as players, can we all commend him for filling a huge concert hall of people that paid to enjoy a trombone!