I traveled to New York last week to enjoy the International Trombone Festival at Julliard.

I’ll write separately about particular events I attended, but my twenty thousand foot perspective was that it was a thoroughly well-conceived and organized celebration of all things trombone.

As one would expect from one of the premier music venues in the world, Julliard hosted it with great style and with a reverence for the trombone that I thoroughly appreciated. The ITA did a good job including within the four-day program a diversity of styles and personalities. As president of the ITA and organizer of the event, Joe Alessi made several appearances including a tour de force performance Friday night with the New York Philharmonic of a world premier concerto for trombone written by William Bolcom.

The final night was a jazz spectacular organized and performed in by Michael Davis which included more than a dozen of the world’s greatest jazz players including Ed Neumeister, Marshal Gilkes, Wycliffe Gordon, Conrad Herwig and special appearances by Bill Watrous and the great Dick Nash – for whom a special recognition was presented. And yes, they both played!

I attended several master classes, from learning about multiphonics from Jen Baker, to live electronic looping and performing by Christopher Bill, to the integration of meditation and trombone warm-up by Ed Neumeister, to learning about playing things on the trombone that I never thought possible by Håkan Björkman.

Steve Norrell, the bass trombonist for the Metropolitan Opera, performed a beautiful tribute piece to the late great Edward Kleinhammer by John Stevens entitled The Kleinhammer Sonata for Bass Trombone and Piano. Steve played beautifully and had some interesting things to share with his standing room only crowd about Mr. Kleinhammer, trombone playing and about his lessons with the great Arnold Jacobs.

Of course, we were treated to a large trombone choir conducted by Julliard’s long-standing trombone professor, Per Brevig. The choir was comprised of Julliard Alumni from all over the world. Twenty-one of them to my count. They performed some beautiful music that really exemplified why the trombone is such a capable instrument for large ensembles. I don’t know Mr. Brevig, but my guess is that he is arguably the world’s leading authority on trombone choir literature.

I, on the other hand, am certainly an expert neither in trombone literature nor in the great non-jazz trombonists of today. One new name for me was Jorgen van Rijen, a prolific Dutch soloist and orchestral trombonist. While his solo performance was one of the best of the event, his performance of Slipstream for Trombone and Loopstation was captivating. With nothing but his horn and the Loopstation, Jorgen crafted modern soundscapes and patterns against which he performed with virtuosity. Maintaining an evolving musical flow and demonstrating what appeared to be mastery over the technology, a very cool fifteen minute piece really sparked the audience. We loved it.

I visited the exhibits of trombones, mouthpieces, literature et al but stopped cold at the S.E. Shires Company booth. There I saw a stunning alto case that I learned was the prototype of cases soon to be in production for their unique altos. Shires has developed an alto with its tuning slide at the top of the main slide. That allows the horn to have no moving parts where the tuning slide is normally placed and therefore, eliminating impediments to the air as it rounds the corner heading out the bell.

No, I didn’t buy a horn (thankfully, I didn’t have my mouthpiece with me), but I had to have the case. I spent a good 30 minutes outside on my phone looking for alto cases with which to compare it. Guess what? There aren’t any. I suppose it makes sense that there is no real market for alto cases. Within this one, the bell and slide fit snugly in the plush interior with its exterior skin made of a thick soft-to-the-touch dark chocolate colored vinyl. If you want one Shires says it will soon retail at around $500. 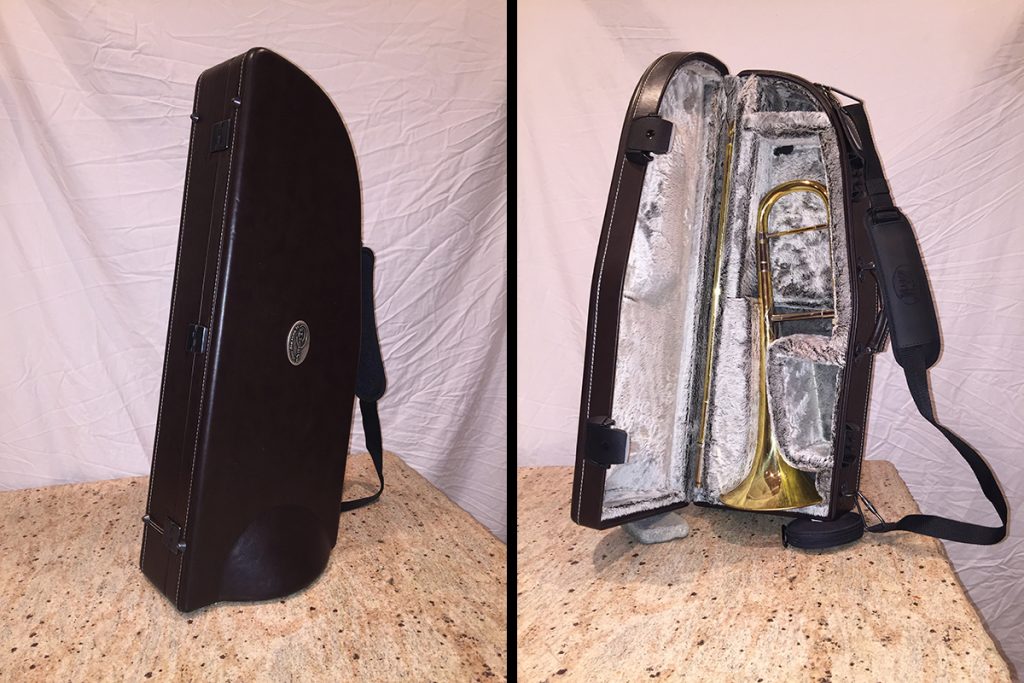 I really want to contribute in some way to next year’s event in California. One thing I missed was seeing something about the alto, but as Ron Barron correctly points out in his comment below, there was some alto performed, including by him. Unfortunately, I missed what I’m sure was an inspired performance.

I’ll be writing more about certain events in the following days, so stay tuned.