At a rehearsal the other day, Frank Darmiento, a fine Phoenix musician who plays both tenor and alto trombone, was talking about the differences between tenor and alto and how that effects playing in the high register. I must admit I’d never thought of it this way, but what Frank said made a lot of sense.

It’s a popular misconception that it’s easier to play higher on the alto because it’s a smaller horn. After all, size matters because trombones play higher than tuba and trumpets play higher than trombones. Common thinking is that since the alto is a fourth higher (and smaller) than a tenor, playing a high Bb should be similar to an F above the staff on a tenor. Speaking for myself and because I play a 6 1/2 AL tenor mouthpiece, the higher register does not correlate in that way. But the alto does provide a benefit which Frank identified.

Notice that on the following first position overtones on the alto, the high Bb (6th) is separated by a minor third above and below. On the tenor that Bb (8th) is separated by only whole tones (see above). While that may seem subtle, when aiming for that Bb, the alto player has more room to pick it out. The tenor player has to pick it out between two neighboring whole tones.

The same is true for the high C. On an alto, that note is played in a pulled-in second position (the flat 7th partial) and is a minor third above the A in the 6th partial. On a tenor that C is is separated only by whole tones in the 3rd position. 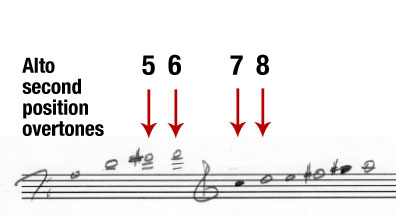 The same is true for the high Eb and F in that they are separated by whole tones on an alto but by only half steps on a tenor. Again, a small distinction, but that little bit of extra room is beneficial when you’re stretching for those notes. Like the tenor, they are still high notes that, especially with a tenor mouthpiece, still require practiced effort to pull off.

Regardless, I think Frank made a good point about that extra room making it a bit easier to pick out those common high notes.

Thanks, Frank, for pointing that out.