Today I was in the SAE mastering studio with Roger Siebel mastering eight of my new tunes. Turns out that my session was the last of his long career.

Roger mastered the Roads Less Traveled CD two years ago and last month, I had the feeling that I should reach out to Roger.  I have a good amount of music on which I’d like his touch, and knowing Roger is right around retirement age, I thought I should confirm that he is still working his craft.

Sure enough, I was told that he was retiring in two weeks and if I wanted him, I’d better hurry. So, I booked the time and spend the next two weeks tweaking the mix of each of the tunes I wanted mastered. The bad news was that almost every tune over two months old was in need of remixing, replaying or re-recording. The good news was that I heard the problems. Recording and mixing every day has its benefits, and like any skill one consistently practices, improvement comes.

Mastering is a skill I have not developed. I’ve heard it said that the artist shouldn’t do his or her own mastering since they are too close to the mix and won’t be as good at hearing what needs to be done. I would be guilty of that. I get into a sweet spot of loving my mixes. A pro like Roger will hear the anomalies of the mix. Too much bass, not enough bass, shrill high frequencies, audio edit pops, etc.

In the end, each of the tunes had a nice cohesiveness. The aberrant frequencies were tamed and each tune now has a matched overall volume. Done right, mastering creates a kind of audio glue that makes all the elements in the mix work well together.

Roger has had a great career. He and Manfred Eicher recorded, mixed and mastered some of the early classic records out of Eicher’s ACM jazz label. Roger’s lobby walls are adorned with some of those classic record covers of the pioneers of ECM jazz. He is also an expert with a vinyl lathe that is used to create the grooves in a vinyl record (see it to the left of Roger in the back of the photo below.) He’s very proud of it and will be happy to talk your ear off about groove distances and frequency loss as the grooves get closer to the center. I don’t really understand it but it’s fascinating to hear Roger talk about the physics of it all.

I will miss hearing Roger perform his craft on my music, but I wish him and his wife Mary all the best as they enter retirement. As Roger told me with a big smile, “In retirement, every day is Saturday”! 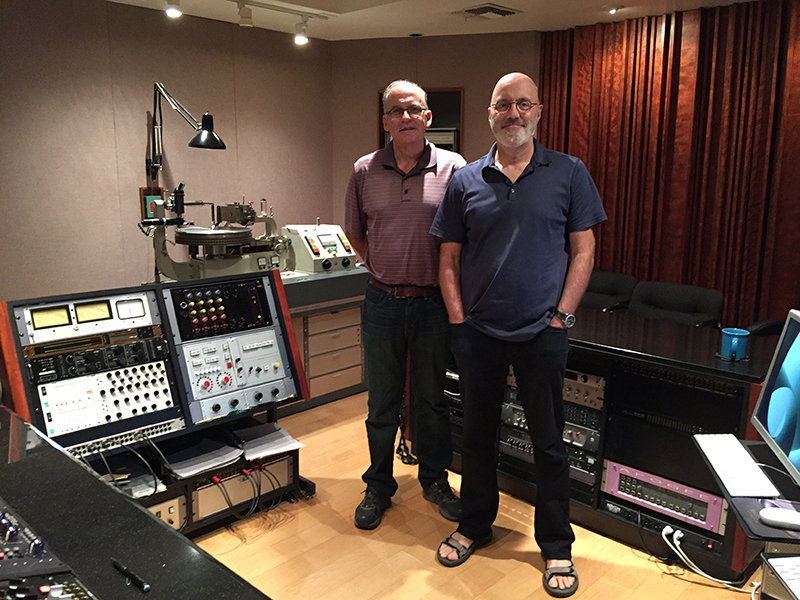