My upcoming book, Trombone Improvisation Savvy, departs from the traditional approach to improvisation. Rather than focus on harmonic theory and chord-scale relationships, the book will focus on developing one’s ear. Listening.

Of the two main parts of the book, part one focuses on ear training. I’ve created several exercises within the first part of the book that provide audio files and instructions for hearing what is played on the audio file and then singing or playing it on the trombone. The exercises provide single notes and short phrases – simple to complex.

I’ve also created an exercise containing a progression of slowly evolving chords. The object is to quickly play ascending or descending sustained notes that fit within each chord  as you hear each chord in the sequence.

Here are three samples. Play the following three sound files containing a progression of chord changes. The basic and intermediate start on C major 7 and the advanced begins on E minor 7 . The idea is to sing or play on your trombone a sustained note starting on any pitch (perhaps for the C major, begin with D, E, G or B).  Move up or down by the smallest interval possible as each chord changes. You’ll basically be creating a scale using your ears to guide you. Listen for the duration of a beat or so from each chord before deciding on a pitch. How quickly and accurately can you hear and hit the next note in the sequence?

This first progression is simple. For this, I’ve given you two examples of notes that can be played ascending from G and B. Again, start on any note and go up or down. Play the smallest interval possible (half step, whole step or minor third). The point of the small interval is to simplify the note choices while limiting you to a specific direction. After mastering this exercise, make up your own rules if you wish: change the intervals allowed or go up and down. The second progression is a bit more complex and the third is even more complex.

After the sound files, I’ve displayed some sample ascending note sequences. Try to look at my note sequences only as a last resort. Remember, this is ear training. You have  seven notes on which you can start each exercise and two directions, so this shouldn’t quickly get boring. 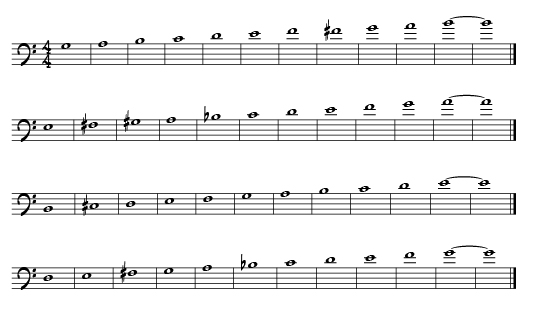