I’m writing a book on improvisation called Jazz Ear Savvy. I consider it an extension of the ear training concepts and exercises introduced in my book Trombone Improvisation Savvy. By the way, I prefer the term ear building since ear training sounds like too much work.

The listening exercises in Improvisation Savvy are limited to a sort of call and response of single notes and short phrases. Jazz Ear Savvy will expand on those exercises to train your ear to more fluidly direct your instrument through the various key centers you’ll encounter in your improvisation.

One concept I focus in on in the book is the circle of fifths. I’ve created exercises that travel through the circle–starting with just playing the roots to more difficult melody fragments. I’ve also shown the relationship between the relative position of the tune’s key centers on the circle and the harmonic complexity of the tune over which one would improvise.

Here’s an illustration of the circle of fifths: 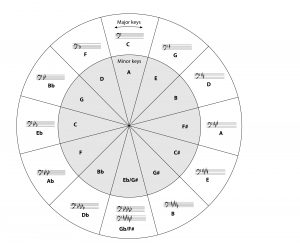 In addressing why the circle of fifths is important to the study of improvisation (and to a book dedicated to developing one’s ear for music), I refer the reader to an incredibly eloquent explanation of the harmonic foundations of music given many years ago by Leonard Bernstein.

As I wrote in Jazz Ear Savvy:

Improvising over jazz harmony requires us to move freely and melodically from one tonality to another. I use the word “melodically” loosely since greats like Ornette Coleman, Eric Dolphy, Cecil Taylor and others have a sense of melody that goes beyond more conventional players like Art Pepper, Chet Baker, and Bill Evans. But all these players have a firm grasp on the harmonic underpinnings of their improvisation.

Below are illustrations of a few well-known songs with their major key centers highlighted. Notice those with the more limited and neighboring key centers versus their opposite. Are these relationships an indication of the song’s difficulty for improvisation? Starting with C Jam Blues, notice that the entire song revolves only around F major (C7) and neighboring Bb major (F7). Notice why the bridge of Miss Jones is tricky. See how far the Gb major is from the rest of that tune? Similarly with Dolphin Dance and All the Things. To play fluently through All The Things You Are requires a facility within most of the major keys.

Notice also the symmetry of some of the songs, especially Miss Jones and All The Things. I’m sure there’s a ripe area for study concerning that! 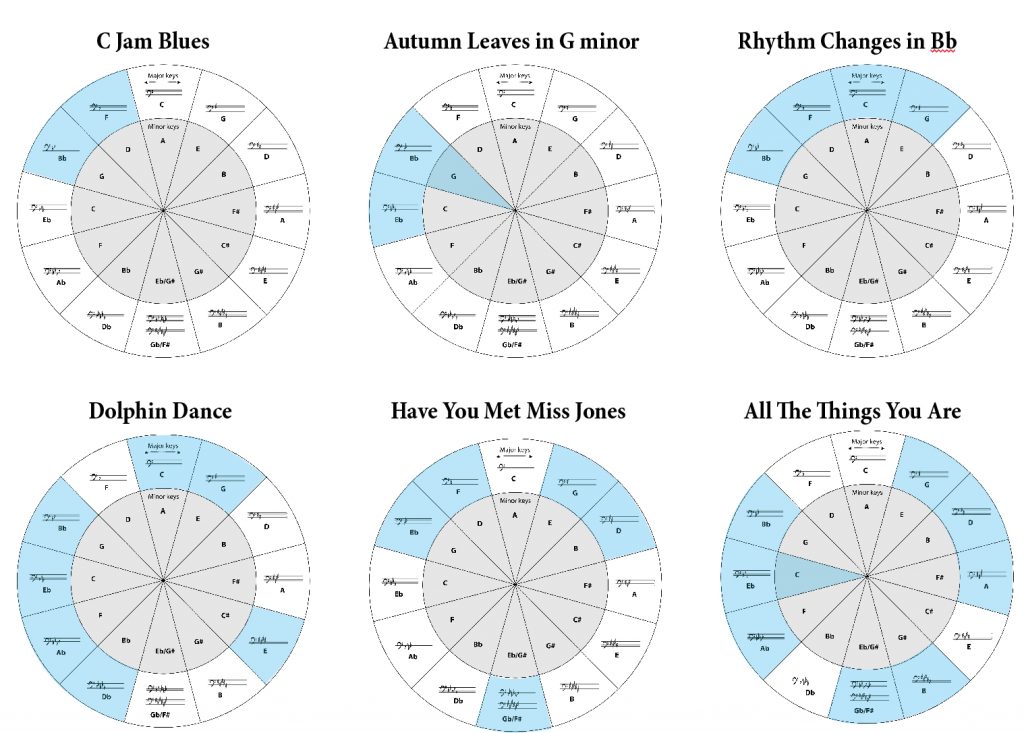