Kudos to the ITF for the diversity of players and musical styles it included in this year’s New York festival.

An example of that diversity was the masterclass conducted by Christopher Bill. Best known for his viral YouTube video performance of Pharrell’s Happy, Christopher lead an entertaining demonstration of his live looping playing style of trombone.

Dressed in an eye-popping purple jacket and equally colorful shirt and slacks, Christopher showed himself as a very affable and capable performer to this packed room on onlookers. It was the only performance I attended at the festival that included children in the audience, which certainly says something about his broad appeal. After all, I doubt that the 3.2 million views of his Happy arrangement are all from trombone players!

Standing behind keyboards and various stacks of equipment, Christopher began by describing the hardware and software he uses for performances and recordings. Ableton Live is his DAW of choice and the Electro-Harmonix 45000 Looper is the machine he uses to create his signature style loop-built performances. He also uses the TC-Helicon VoiceLive 3 harmonizer/ effects/looping combo. 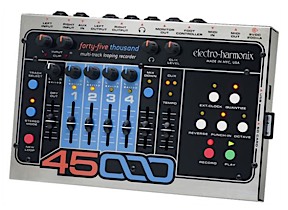 He also demonstrated a grid-type MIDI controller which was the Push 2 by Ableton. 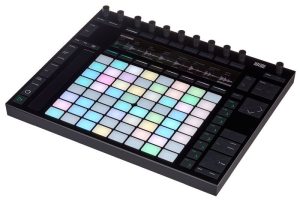 Christopher’s masterclass was a nicely balanced hour of talk and performance, answering questions from the audience and playing trombone enhanced by his formidable technology skills.

Probably the most well-received performance of the afternoon was a creatively well done looping rendition of the top-40 tune 7 Years. Posting a trombone version of current hit tunes almost each week on his YouTube channel, Christopher has his finger on the pulse of pop music. I could see the kids popping around in their seats as he played, and he later told us that during a recent performance of 7 Years for a young audience, many were singing along. Hey, if you’re looking to grab hearts and minds, that’s a great formula. And for doing it on trombone, Christopher deserves a lot of credit!