I’ve been traveling pretty much solid since the ITF in Iowa City a few weeks ago. It feels like I’ve had a few birthdays since the event.

My son and I had a great time at our table where I got to meet some great people and sell a few books.

Staring me down, directly across from our table was a sterling silver alto trombone. It had a little bit of an odd look in the tuning slide but I was compelled to try it out. The table across from mine displaying this silver alto was a Netherlands company called Adams. They seem to be more well known for their percussion instruments than brass, certainly more than trombone. They have a large line of trumpets.

The alto I was eyeing was their very first. Miel Adams, their head of production and sales, said that he made this alto just to display at the festival. So I tried it.

I wandered back into the hotel’s service area where it was much quieter and played the horn for a while. I could tell right away that it was special. Tighter sound, not quite as bright as my Yamaha, and a much wider sweet spot–much of it due to the sterling silver bell. It’s less brassy than the Yamaha, which I like. My Neumann Mic accentuates the higher frequencies so it’s nice to have those tamed a bit. The sixth position top of the staff Bb sounds much better (more true to its first position relative) than that note on the Yamaha. Same with the fifth position Eb above it. False tones between low E and the Ab above it lock in better and sound rounder than on the Yamaha.

I tried again the next day along with every other alto in the hall. The altos ranged from unplayable to okay. The exception was the Shires, but the problem I have explain to Steve Shires every year is that I don’t like the tuning in the slide. It makes it too heavy and is distracting. I might get used to it in time but I’d rather play with a much lighter slide like that of the Adams.

Miel let me try it for a week or so at home and return it if I ended up not loving it. I played it in a big band last week and really liked the sound, attack, and overall tight sound. Tonight, I recorded it to hear its sound through my mic, and my Universal Audio interface. I recorded an A/B test between the Adams and my Yamaha. No reverb, compression or EQ. Just raw.

I won’t say which horn is which in the following test. I’d love to get your feedback.

Here are the horns from the above test without the strings. The order is reversed.

I’ve played the Yamaha YSL671 for 30 years and it has served me well, but I now play an Adams. The silver look is a really nice touch, but its solid tight sound sold me on making the switch! 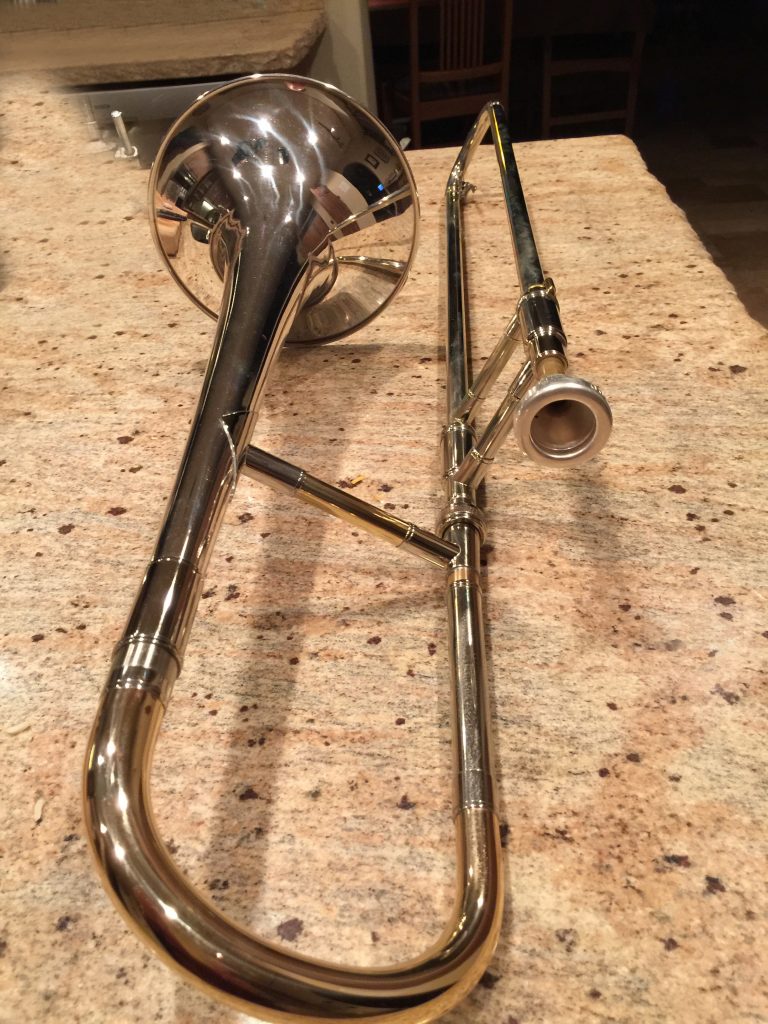